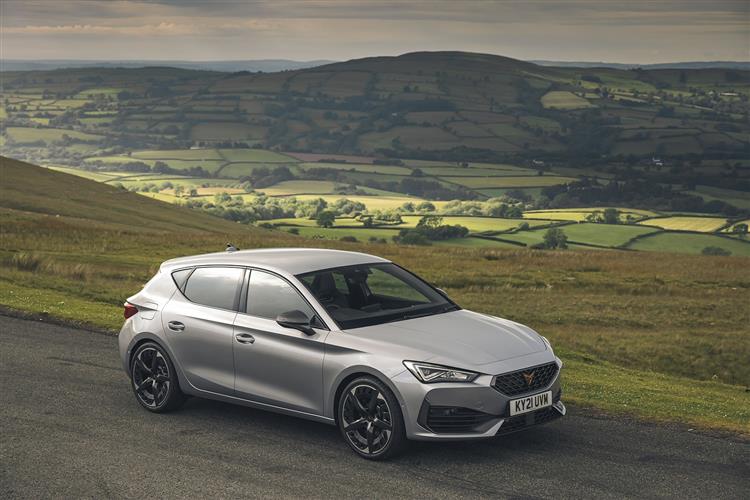 The CUPRA Leon is a force to be reckoned with, thinks Jonathan Crouch

For about as long as many of us care to remember, a SEAT Leon Cupra was a cheaper way to get into a Golf GTI. Okay, so you had to put up with an interior that was notably less attractive, but in the way it drove it was pretty much identical. Same engine and running gear, same great way it went up the road - you just paid less. These days, the Leon has stepped out from the long shadow cast by the Golf GTI and has got a bit Rafa Nadal on us. All bulging biceps and attitude, the CUPRA Leon has us all in a bit of a spin. In theory, it's a hot hatch from a fresh brand, CUPRA being a marque created by SEAT in 2018 for its sporting models. In practice though, this car functions as the flagship variant for the latest SEAT Leon range and can be had with either faster versions of that car's 2.0-litre TSI petrol turbo engine or a quicker tuned-up take on the e-Hybrid PHEV powertrain also familiar to Leon customers. So really, it's a Leon CUPRA, not a CUPRA Leon, but that's being pedantic. What's more important is what this car is like. And here, we're going to find out.

The Leon Cupra has some form line. There's never been a duff one and the latest CUPRA version of this Spanish hot hatch comes with real giant-killing ability. Various engines are on offer and in every case, you have to have your unit of choice linked to a 7-speed DSG twin clutch auto paddleshift gearbox. Most customers will be choosing either a hatch or an estate with one of two available (but very different) 245PS powertrains. There's a conventional 2.0 TSI petrol turbo unit. Or a clever 1.4-litre petrol/electric PHEV plug-in e-HYBRID engine which can travel up to 32 miles between charges and manages 62mph in 6.7s en route to 140mph. Think of these variants as alternatives to Volkswagen's Golf GTI and Golf GTE (all the same mechanicals feature). If you want your CUPRA Leon with even more zip, you'll need to get the conventional 2.0-litre TSI turbo unit in uprated tune - similar to the sort of thing you'd find in a Golf R. There are two options - a front-driven hatch model with 300PS. Or a '4Drive' 4x4 estate with 310PS which makes 62mph in 4.8s en route to 155mph. Whatever CUPRA Leon model you choose, it should handle well. SEAT's engineers have revamped the previous model's electric power steering system and say it's the 'most progressive feeling' rack they've ever delivered. The ride has been lowered by 25mm at the front and by 20mm at the rear over a standard Leon. Plus on most models there's a standard DCC adaptive damping system to vary ride quality based on your choice from a range of drive modes. Stopping power's taken care of by a larger set of Brembo 370mm disc brakes gripped by copper-coloured calipers.

Any Leon that wears a Cupra badge has to dose up the attitude a degree and this CUPRA Leon looks really gym-toned. The CUPRA logo sits boldly on the front grille, with a large front splitter and big air intakes highlighting this car's assertive look. There are side skirts that visually lower the vehicle and you get CUPRA-specific 18 or 19-inch black alloy wheels with either copper or silver finishes. The dark chrome front grille frame, front wings and exterior side mirrors contrast with the various model-specific body colour options. Inside, there are sporty bucket seats and a CUPRA steering wheel, which houses the engine start and driver mode selection button. You also get an interactive digital driver display to replace conventional binnacle dials. And as with other Leons, there's a large, central 10-inch infotainment touchscreen that reduces the button count. This look is further accentuated by the vehicle's compact DSG shifter. Throughout the interior the copper and dark chrome detailing brings a sense of drama, with the dashboard and door mouldings finished in brushed dark aluminium and illuminated CUPRA treadplates in the front doors and colour coded door panels and seats. Otherwise, it's much as in any other Leon. There's comfortable room for a couple of adults in the back. And a 380-litre boot in the hatch (it's 617-litres in the estate). That's for the conventionally-engined models; for the PHEV e-HYBRID hatch and Estate derivatives, the figures are 270 and 470-litres respectively.

From launch, four trim levels were on offer - 'VZ1', 'VZ2', 'First Edition' and 'VZ3'. All models get, amongst other things, full-LED headlights, sports suspension, a reversing camera and the SEAT Digital cockpit with an interactive driver display screen and a 10-inch central infotainment monitor. All that comes with base 'VZ1' trim, priced from around £31,500, but with that spec level, you're restricted to the hatch body style and the conventional 2.0 TSI 245PS engine, so you'll probably want to upgrade yourself at least as far as 'VZ2'-spec, which gives you the option of both body shapes and the e-HYBRID powertrain if you want it (priced from around £34,500). 'VZ2' models add DCC dynamic chassis control, speed-sensitive steering, larger 19-inch alloy wheels and (on the Estate) roof rails too. The flagship 'VZ3' model is priced from just over £36,000 and adds petrol blue Nappa leather bucket seats, a heated steering wheel and a wireless smartphone charging pad. If you want the 300PS 2.0 TSI model, you'll need from around £36,000 and there are two trim levels - 'VZ2' and 'VZ3'. Depending on the spec level chosen, there's plenty of autonomous driving tech and safety equipment too fitted across the range. Predictive Adaptive Cruise Control (ACC) uses feeds from GPS data delivered from the navigation system and input from the front-mounted camera and Traffic Sign Recognition, allowing it to proactively adjust the cruise speed depending on the road layout ahead. When the road becomes more congested Traffic Jam Assist takes the stress out of driving, maintaining a safe distance to the vehicle in front. There's also an 'Emergency Assist' system that can bring the Leon to a controlled stop if you're taken ill at the wheel. And a 'Blind Spot Detection' system that alerts the driver to another vehicle in their blind spot.

Owners of previous generation Leon CUPRAs will look incredulously at the WLTP efficiency stats of the e-HYBRID version of this current model - up to 217.3mpg on the combined cycle and up to 30g/km of CO2 for the hatch version which. For the CUPRA Leon e-HYBRID Estate, it's up to 201.8mpg and up to 31g/km. Insurance is group 30E or 31E. Powering a PHEV CUPRA Leon up from a domestic socket would take around five hours, but most owners will want to find an extra few hundred pounds to install a wallbox charger in their garages. Use such a wallbox - or indeed plug in to one of the many public charging points springing up around the country - and you'll be able to reduce your charging time period from empty to around four hours. Once that's been done, a PHEV CUPRA Leon can travel up to 32 miles on a single charge. Which means that if the vehicle is only used for short commutes and re-charged regularly overnight, it's conceivable that this electrified Spanish hot hatch could be run almost entirely on off-peak electricity, costing pennies rather than pounds to consume. More relevant comparisons between old and new generation Leon CUPRAs should of course be made by considering the more conventional 2.0 TSI CUPRA Leon models - here, think around 38mpg on the combined cycle and about 170g/km of CO2; that's for the 245PS front driven version. The 300PS variant manages up to 37.2mpg and up to 171g/km.

There's never been a CUPRA-badged Leon quite like this one. For some hot hatch customers, the idea of being able to combine storming performance with the all-electric drive capability of the e-HYBRID variant will be novel. Others will want to stick to the familiar 2.0-litre petrol turbo formula of the more conventional derivatives. It's true that most of what's on offer here can also be had in differently packaged form with either a Skoda Octavia vRS, a Golf GTI, a Golf R or an Audi S3. But the CUPRA Leon has a slightly more dynamic look and feel than any of those cars - closer to an old-school hot hatch if you like. If that kind of twist on the usual Volkswagen Group shopping rocket confection appeals, we think you'll bond quickly with this Iberian road burner.