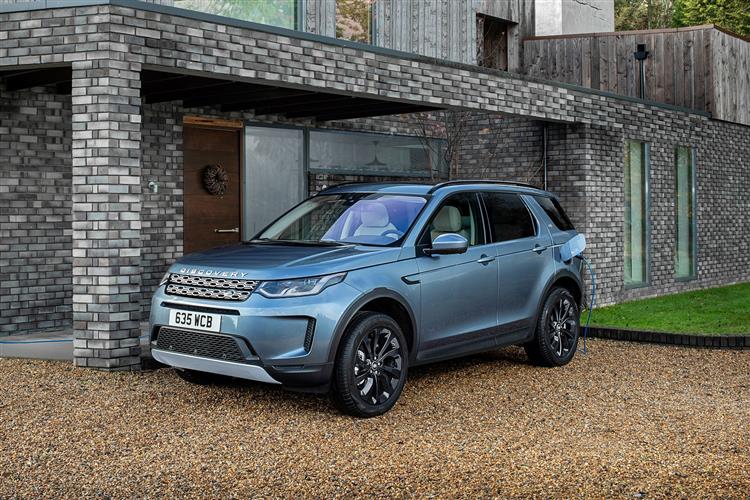 Disclaimer: Charging speeds are estimates and should only be used for general comparative purposes. Actual charging rates and speeds depend on vehicle charging capability, ’useable’ battery, energy loss and current state of charge.

Would you really want a three cylinder engine in a Land Rover Discovery Sport? In the case of this PHEV version, Jonathan Crouch rather thinks you might...

One of the main reasons that Land Rover went to all the trouble of fitting a completely fresh 'PTA' or 'Premium Transverse Architecture' front structure to its Discovery Sport SUV was so that it could create this variant, the P300e PHEV version. The Solihull maker's existing Ingenium four cylinder 2.0-litre petrol unit was too old to be converted to a PHEV format, so a completely fresh three cylinder 1.5-litre Ingenium turbo petrol engine had to be created for it. A huge engineering effort's gone in to bring this variant to market. How does it stack up?

The Discovery Sport PHEV is the quickest variant in the line-up, able to manage 62mph from rest in just 6.2s and reach 84mph on electric power alone. Above this speed, the electric motor is decoupled to reduce drag and the car reverts to front wheel drive. Obviously, if you use this model's reserves of performance too often, you'll very quickly deplete the all-electric driving range, WLTP-rated at 38 miles. Mated to an eight-speed auto gearbox, this model's three cylinder 1.5-litre engine puts out 197bhp, its efforts further aided by a 107bhp electric motor mounted on the rear axle which delivers AWD capability and creates a total system output of 296bhp, with 540Nm of torque. The electric motor is powered by a 15kWh lithium-ion rechargeable battery pack. The 1.5-litre engine has been designed with an optimised exhaust gas flow system which improves turbo response and Land Rover claims that there's no refinement downside with the switch to a three cylinder format. Finally, the brand reckons that the PHEV system's seamless control between the front and rear axles makes this plug-in variant even better than a conventional model off the beaten track. Certainly, you'll damage any direct rival if you attempt to take it anywhere near what this Discovery Sport can do 'off piste'. That's thanks to 212mm of ground clearance, 600mm of wading depth capability and an evolved 'Terrain Response 2' driving mode system which sets the car up perfectly for the type of ground you're travelling over.

Often with PHEV models, we're told that there are 'no packaging compromises' and generally in this case, that's broadly true, though one major drawback is that a buyer of a Discovery Sport plug-in hybrid won't be able to have the usual third seating row in this model. At least luggage space is largely unaffected, thanks to the way that the exhaust has been packaged down the side of the car, giving the engineers room to insert all the necessary power electronics without intruding on passenger room or cargo room. That also meant that the development team were able to use the whole width of the vehicle for the PHEV battery and the fuel tank - which is why the fuel tank size (57-litres) is unusually large for a plug-in hybrid model. Another reason why second row passenger space isn't compromised here is that the rear axle's electric drive unit slots between the integral-link rear suspension and needs no physical propshaft. Basically, everything's under the car, so the overhangs and ground clearance are exactly the same as in a normal Discovery Sport. And it's still possible to have a spare wheel, which is unusual in a PHEV. If you're not familiar with the usual version of the much improved version of the model, though the exterior styling is quite familiar, you'll find the cabin layout very different thanks to the introduction of a larger 'Touch Pro' 10.25-inch centre-dash screen and, on plusher versions, a customisable 12.3-inch 'Interactive Driver Display' replaces the usual instrument binnacle dials. There's comfortable room for a couple of adults in the back and a large 840-litre boot, extendable to a 'wet' total capacity of 1,794-litres.

Prices for this 309hp Discovery Sport PHEV sit in the £45,000 to £51,000 bracket and there's a choice of three core trim levels, 'R-Dynamic S', 'R-Dynamic SE' and 'R-Dynamic HSE'. To give you some range perspective, those figures represent a premium of around £3,000 over the nearest equivalent conventional petrol model, the 250hp P250 variant in equivalent R-Dynamic form. If you happen to be looking at the core diesel Discovery Sport model, the mid-range D180 (which has just 180hp but comparable levels of torque to the PHEV), the premium for an upgrade to plug-in motoring would be just under £3,000. As those trim level designations suggest, all versions come only with the 'R-Dynamic' pack which is normally a £1,500 option on the Discovery Sport. This includes restyled bumpers and a smarter alloy wheel style, plus special bonnet and tailgate script and a front grille with 'Shadow Atlas' finishing and a gloss black surround. Inside, the 'R-Dynamic' pack gives you 'Ebony'-trimmed seats with red stitching, 'Titanium Mesh' trim finishing, black gearshift paddles and branded metal treadplates. Standard kit across the range includes LED auto headlights, rain-sensing wipers, alloy wheels of at least 18-inches in size, ambient cabin lighting, dual-zone climate control, and a heated windscreen. Plus perforated leather, electrically adjustable front seats, an infotainment system with Android Auto and Apple CarPlay, auto dimming on the side mirrors and rear-view mirror, and traffic sign recognition with an adaptive speed limiter.

Let's reaffirm the WLTP cycle stats that may well sell you on the idea of running one of these: between 36-44g/km of CO2, up to 175.5mpg on the combined cycle and a 38 mile all-electric driving range. That emissions figure means a notably low Benefit-in-Kind taxation rating. The charging port for the Samsung-sourced 15kWh battery pack is on the rear wing (on the opposite side to the petrol filler flap) and charging from a 7kW garage AC wallbox can be done from 0-80% in 1 hour and 24 minutes. DC fast-charging (up to 32kW) can reduce this 0-80% fill period to just half an hour. Charge from a domestic 3-pin plug via a Mode 2 cable and the process will take 6 hours and 42 minutes. The PHEV model's engine is 37kg lighter than the Discovery Sport's conventional 2.0-litre four cylinder petrol unit and works with extremely low levels of internal friction. Incorporated within the PHEV system is a belt-integrated starter-generator, which allows energy regeneration whilst braking or coasting. The Aisin auto gearbox helps out too, saving 5kgs of weight over the ordinary model's ZF-sourced 9-speed auto. As usual with a Discovery Sport, a three-year, unlimited mileage warranty comes as standard, with further extensions available if you want them.

We're a touch disappointed that this PHEV variant's clever tech couldn't have been built into a 7-seat version of this car but otherwise, there's lots to like about the Disco Sport in P300e guise. Everything here represents new technology for the Land Rover brand - mechanicals, software, the lot and it's taken the company around four years to create everything from scratch, then decide how it should optimally function with the vehicle control systems that work in harmony with the front and rear axle in the much improved version of this Solihull SUV. We're extremely impressed by the end result, an uncommonly well developed piece of PHEV engineering. Yes, there's a premium to pay over a conventional 2.0-litre petrol version of this car, but we think it'd be well worth paying. In any case, you'd get most of that extra outlay back over a typical ownership period in terms of running cost and taxation savings, plus stronger end residuals. Whether this P300e model makes more sense than a diesel Discovery Sport might be a harder call to make but if the figures stack up for you, then the opportunity for a long overdue switch from the black pump might finally have arrived.