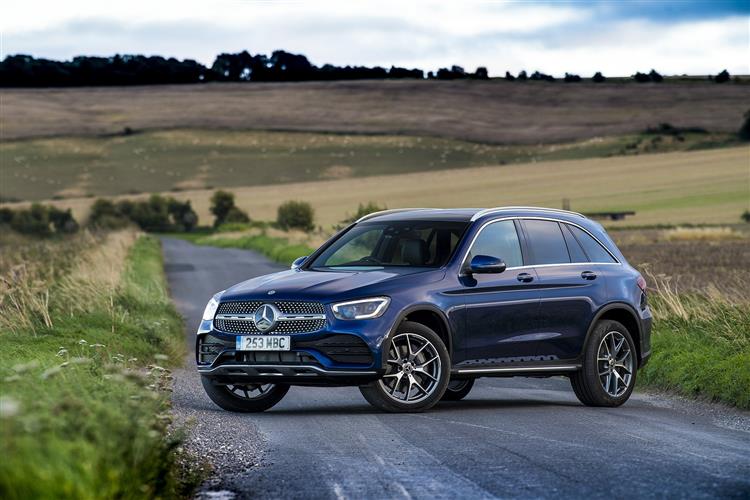 So you want a mid-sized SUV with a prestigious badge; but you'd like a more dynamic-looking one. Something like a BMW X4, a Range Rover Evoque - or perhaps this car, Mercedes' GLC Coupe. Jonathan Crouch looks at the revised version.

A decade ago, the whole idea of an 'SUV coupe' sounded ludicrous. Then BMW came along with their X6 and suddenly, the concept didn't seem quite so silly. And it definitely didn't once the Bavarian brand revealed sales figures that showed that car was striking a resounding chord with better-heeled buyers. So successful was it that in 2014, BMW revealed a smaller X4 model, essential a coupe version of their X3 compact SUV. Mercedes were watching and, having copied the X6 with their GLE Coupe, the Stuttgart brand in 2016 announced its own spin on the X4, the GLC Coupe, a car substantially improved in Spring 2019 to create the car we're going to look at here. This car's opposition extends beyond the X4 of course. Potential buyers will also be looking at style-conscious small SUVs like Range Rover's Evoque - and maybe even at Porsche's Macan. Should they also take this Mercedes into account? Let's see.

Despite its more dynamic looks, you shouldn't expect a GLC Coupe to be really any more dynamic to drive than its SUV stablemate. As with that car, air suspension can be added at extra cost. This option is desirable. 'AIR BODY CONTROL', as Mercedes call it, promises a cosseting ride when you want luxury or flat, sports car-like handling when you're in a hurry. All models feature 4MATIC 4WD. For highway use, there are now more semi-autonomous driving assistance systems. Active Distance Assist DISTRONIC and Active Steer Assist provide even more support to help the driver to steer and to keep a safe distance. Under the bonnet, Mercedes has worked on making the engine range more powerful and more fuel efficient than before and the mainstream part of the line-up is based around four-cylinder units and drive will be supplied through a standard 9-speed automatic gearbox. A 2.0-litre turbocharged petrol unit features in the 258hp GLC 300, which now uses the Mercedes' EQ 48-volt mild hybrid system. Here, there's an integrated starter/alternator unit that can recover up to 10kW of energy when decelerating, which can then be deployed below 2,500prm to reduce the effort required of the combustion engine. The two main diesel options are the 194hp GLC 220d and the 245hp GLC 300d, which get the brand's latest 2.0-litre diesel, replacing the previous 2.1-litre unit. The GLC 300de diesel plug-in hybrid would be an interesting alternative to diesel power. And at the top of the range sit the sporting Mercedes-AMG models, either the 390hp six cylinder '43' or the eight cylinder '63' flagship variant, offered in either 476hp standard guise or 510hp 'S' form.

The main styling change is the adoption of standard full-LED headlamps. Otherwise, design-wise, things are much as before. As you'd expect, this car's design owes much to that of the standard GLC hatch model, so you get the same sloping roofline, narrow rear window and big tail-lights. The front end is exactly the same as that of the regular GLC but if you get out the tape measure, you'll find that this Coupe is 80mm longer and 40mm wider than its donor model - and slightly longer than a rival BMW X4. Inside, the GLC Coupe now gets the latest version of Mercedes's MBUX infotainment system. This means that the centre-dash display, which has grown from 8.4 inches to 10.25 inches, is now touch sensitive, and can respond to both gesture and more detailed voice commands. A 12.3-inch digital driver's instrument binnacle display is now offered in place of the previous car's analogue gauges, and its three sections can be customised to display different information. These menus can be accessed through the updated steering wheel, which features a mix of physical and touch-sensitive controls first seen on the E-Class. The cabin also features a couple of new material options, including two new wood finishes for the dashboard. Standards of shoulder, elbow and legroom are the same as in an ordinary GLC at the front, but headroom is inevitably a little more restricted at the back, though five folk can still be seated inside. The 491-litre boot loses 59-litres of capacity over the standard GLC and offers a maximum capacity of 1,205 litres with the rear bench folded flat.

You're looking at a premium of around £3,000 to own a GLC Coupe over the standard GLC hatch. That means pricing that starts at just over £45,000 for the entry-level GLC Coupe 220d. 'AMG Line' is standard trim, then there are 'AMG Premium', 'AMG Premium Plus' and 'AMG Ultimate' options. There's a choice of two diesel variants in the mainstream range - the 220d and the 300d - plus a GLC 300 2.0-litre petrol model and a GLC 300de diesel plug-in hybrid. All GLC Coupes receive a 9-speed automatic gearbox, four wheel drive, the 'COMAND' infotainment system, 'DYNAMIC SELECT' handling control with adjustable dampers, plus all the usual niceties you'd expect from a Mercedes of this price. If you can stretch to the sporting Mercedes-AMG GLC 43 (V6) or GLC 63 (V8) variants (priced from around £53,000), there's a choice of standard, 'Premium' or 'Premium Plus' trim levels. Standard equipment on all variants includes a navigation system, Active Park Assist and a keyless start system. Buyers can also expect to find a reversing camera, LED Performance head lights, heated front seats, sports suspension, an electrically operated tailgate and a 'Mirror package' consisting of electrically operated and automatically dimming mirrors. Safety-wise, there's a full rosta of electronic shields that scan the road ahead and prevent you from having an accident. Things like the 'COLLISON PREVENTION PLUS' system, plus the 'Crosswind Assist' set-up and the 'ATTENTION ASSIST' system. Optional is the 'DISTRONIC PLUS' radar cruise control system - with 'STEERING ASSIST' to keep you in lane and a 'Stop & Go' feature that'll slow the car automatically and start it off again if you come across a motorway tailback.

This GLC has to be competitive when it comes to WLTP running costs - and is. The running costs of GLC Coupe 220d and 300d models are similar. The range starts with the GLC 220d which delivers 48.7mpg on the WLTP combined cycle and up to 167g/km of CO2. The GLC 300d achieves up to 44.1mpg and up to 182g/km. For the petrol GLC 300, the figures are up to 34.9mpg and up to 196g/km. The GLC 30d0e petrol plug-in has an WLTP-rated electric driving range of 27 miles while delivering up to 148.7mpg and emitting just 50g/km of CO2. The 13.5 kW battery and 7.4kw on-board charger means the GLC 300de can be charged via a 7.4 kW wallbox in under two hours. What else? Well, we'll tell you that the comprehensive three year unlimited mileage warranty is built upon by Mercedes' Mobilo scheme which delivers breakdown cover for up to thirty years, as long as you continue to have your car serviced at a Mercedes main dealer. And it's worth knowing that your maintenance outlay can be kept a little in check by going for the optional Service Care package that takes care of routine maintenance, spreading the cost of regular servicing. There's also an ASSYST dashboard service indicator that monitors engine use and tells you exactly when a garage visit is due. It's also worth mentioning that the 'Mercedes me' remote online services package that comes as part of the 'COMMAND Online' infotainment system includes remote self-diagnostic capability, enabling your GLC to monitor wear and tear items and alert your local dealer to let you know if something needs seeing to.

On paper, you'd have to wonder why anyone would need a mid-sized SUV coupe. In practice though, it's a very enticing formula indeed, especially in the improved guise that Mercedes has provided us with here. Some may feel that there are still more dynamic choices to make in this segment: the trendier-looking Range Rover Evoque for example. Or the sharper-handling BMW X4. As an all-rounder though, combining many of the qualities you'll find in both those cars, the GLC Coupe is a tempting package.